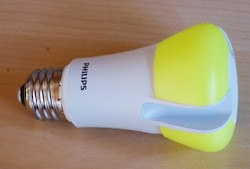 This is the best household LED bulb at the moment. It runs on only 10-watts, gives off the light of a 60-watt tungsten, delivers a soft white light, with the even distribution of the old bulbs. It’s dimmable. And it is promised to last 22-years.  I can confirm all these claims except the last (too early to tell). It is exactly the same shape and size of a 60-watt tungsten bulb, which many other LEDs are not. This makes it easy to swap out. Also, this one is brighter than most other LED replacements that I’ve used, including the previously reviewed Lemnis 40-watt LED bulb. It is more energy efficient than other 60-watt LED equivalents. Believe it or not, at $40 it is among the cheaper hi-powered LED bulbs — although the price is still too high for me to swap all my household bulbs (most of which are compact fluorescents).
Beside the price, two minor caveats. The bulb is heavy. It seems to be made of solid ceramic. It may not work in a counter-balanced fixture like an extended arm lamp. And if the bulb is exposed it shows bright yellow-orange markings when off, which may (or may not) be distracting design-wise.
Compared to tungsten bulbs, this is crazily expensive at $40. But it’s a steal if it lasts 22 years. (By Philips’ calculation you’ll save $137 in the end.) Compared to other LED lightbulb replacements, this one is brighter, more efficient, better color light, smaller, easier to swap, and more affordable. It won the US Department of Energy L-Prize for bulbs, hence its name. In short, the Philips L-Prize bulb is the best bulb if you want to start replacing those 60-watts or higher that you use a lot.
-- KK
[Make sure to check with your local utility company as they often feature rebates on LED bulbs. Home Depot is known for selling this bulb cheaper in-store than they do online for this reason.--OH]
Philips L-Prize LED bulb

$40
Available from Amazon
Manufactured by Philips

via Metagrinderhttp://metgrinder.blogspot.com/2012/11/philips-l-prize-bulb.html
Compendium of Curiosities

Popular posts from this blog

I didn’t know I had knots in my calves, but I did. I spend a lot of time at the computer, and I play some video games, which means that I tense my calves involuntarily and and they get knotted.When I started working out about a year ago, I hired a trainer. The end of each training session included a massage treatment with a foam roller. That’s when I learned that I had knots, because the roller made my calves feel better.Its nice if you have someone else to “roll you out,” but you can also put the roller between your calves and the floor and roll yourself back and forth, using your body weight to apply pressure. You can also use it on your back and arms.It’s also improved the “restless leg syndrome” for two people I know.I have the 36 inch version, which is bulky. I think the 18 inch version would do just as well. -- Carl Mixon j/fit Super High Density Foam Rollers: $14 – $35 depending on size

These 1923 Copyrighted Works Enter the Public Domain in 2019

The Status Board is an iPad app from Panic.  It emulates a huge screen that’s been in their office for a few years.  The app will suck in information from various feeds and produce auto-updating panels, tables and graphs.  Mine is simple.  Here’s a screenshot I took for Rich Stevens last night.  The blurred panel on the left is the email panel.  The photo panel in the top right is a cycling Instagram viewer, showing a new photo from the people I follow there every 15 seconds or so.  I think the visible photo is a shot of some new weird cheap phones taken by Kevin Slavin.  I blurred out some stuff in my calendar on the bottom, too, because you don’t need to see me scheduling my bowel movements.

There are many Status Boards, but this one is mine.  My iPad lives in a stand next to my laptop, as a second screen.  Set up like this – and this is a very simple implementation, no graphs or tables or CSV or JSON data feeds – it’s actually an excellent glanceable information radiator.  I could p…
Read more